A charge air cooler is a critical piece of equipment that has to be maintained properly and regularly. Choosing the wrong type of cooler and not taking care of it can be disastrous and costly. The principle behind the charge air cooler is to lower air temperatures in order to harness the optimum power of the engine’s combustion power. The equipment is designed to cool engine air once it passes through a turbocharger and before it goes through the engine. This is done by utilizing cold sea water at around 25 degrees Celsius or by using a centralized cooling water system with water kept at about 32 degrees Celsius. Power barges and ships understand the importance of keeping the air cooler well-maintained. A poorly performing cooler can damage the engine and lead to power loss and reduced fuel economy.

Engine air coolers were initially designed with enough surface area to counteract the eventual accumulation of deposits on the air part of the heat exchangers. However, today’s economy dictates that new air cooler designs have less surface margin. While this might cut down on cost, it also means deposit build-up will occur at a faster rate.

The inevitable accumulation of sulfur and carbon deposits will adhere to the fins of the engine air cooler. As these layers grow, the cooler’s performance is affected and efficiency is reduced. This will soon manifest in pressure loss and reduced fuel economy.

Charge air coolers should be cleaned as often as operations will allow. Bear in mind that the dirtier the machinery is, the more difficult it is to clean. That is why if the engine cooler is still new and clean, one should make every effort to ensure that it stays that way. Something as mundane as flushing with fresh water can go a long way to keeping it clean. 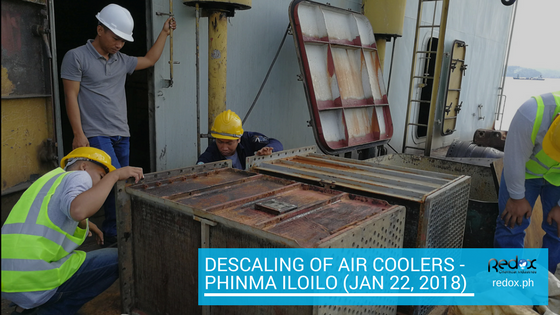 It goes without saying that thoroughly cleaning an air cooler is impossible to do on a daily basis. Ship engineers would probably opt for a monthly cleaning schedule. However, instructions on how to clean a specific brand of cooler should be followed. Otherwise, there’s a big chance the machinery will be damaged.

The cleaning or the rehabilitation of an engine air cooler should be done carefully. Extra care should be taken with regards to fins since they’re the key to a cooler’s optimal performance.

Jetwashing is one option. However, it’s not ideal one since the pressure could damage the fin or cause it to break off. But if this is the shipping company’s preferred method, then lower pressure and warmer water should be utilized.

Descaling is another option. However, there are several things that should be considered. One factor is the chemical to be used. Engineers should ensure that it’s compatible with the engine’s construction materials. The cleanliness of the chemical and how it will be safely disposed of are other things to take into account.