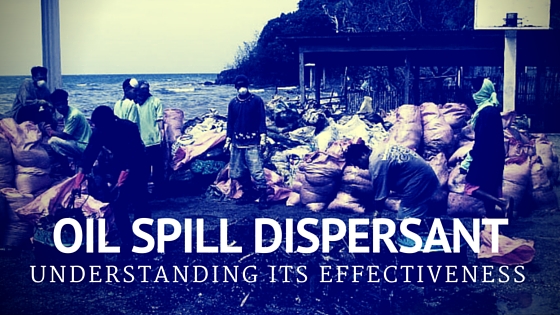 Oil spill dispersant is often used to counter the effects of oil spills, and when appropriately used, it can be an effective oil spill response strategy. It lowers the tension between oil and water and allowing small droplets of oil to break away from the larger clumps. The small oil droplets then transfer into the water column where it is broken down by natural processes.

The primary objective of using oil spill dispersant is to prevent the oil from reaching the shoreline and oiling the coastal wildlife and sensitive habitats such as mangroves and wetlands. In the case of Guimaras oil spill in the Philippines which occurred in the Panay Gulf on August 11, 2006,  the oil tanker M/T Solar 1 sank off the coast of Guimaras and Negros Islands affected almost 1,000ha of mangrove forests. It also damaged parts of the Taclong Island Sanctuary, a feeding and breeding ground for fish and other species.

The oil spill that happened in Guimaras was considered as one of the worst oil spills in the Philippines. Marine scientists believed that the oil spills has long-term environmental damages that can last for decades. Although the signs of recovery of the marine ecosystem in Guimaras is still ongoing, the shellfishes and other marine organisms continue to be affected.

Oil spill dispersants contain surfactants and solvents. These two ingredients help the oil slick to disperse and form small droplets that can be easily breakdown by bacteria and other microorganisms. Solvents help keep the chemicals mixed and assist them to dissolve into the oil and Surfactants, on the other hand, allow oil and water to mix quickly.

Watch this video made by NALCO. It summarizes how oil dispersants work.

Some of the key advantages of using oil spill dispersants are:

1.They accelerate the biodegradation of oil by decreasing droplet size and thereby increasing the amount of oil surface area available to bacteria.

2. Using dispersants can treat more oil over time and can be applied faster than other response option which can prevent oil from spreading over a large area at the surface.

3. When properly used, it can eliminate the formation of water-in-oil emulsions, particularly to low-viscosity oils.

Dispersants have limitations, too. When applied to very viscous oils, they tend to run off oils before the solvents can penetrate. It is essential that monitoring its effectiveness through visual observation or using Ultra-violet fluorimetry (UVF) to decide whether the dispersant application is providing a good solution to the oil spills.

The application of oil spill dispersant is made either at the water surface by aerial or vessel spray application or by using the new technique of applying it beneath the water surface. Spraying using vessel or airplanes is more suitable for treating smaller spills and nearshore areas. Injecting the dispersant on subsurface is also an effective technique to eliminate potential health and safety risks to personnel from inhaling volatile hydrocarbon vapors.

The key to successful chemical dispersion is the ability to target the thickest part of the oil slick promptly before weathering processes make the oil more viscous and prevent the formation of emulsions. If emulsions form, the potential of oils to reach the shorelines increases.

Redox oil spill dispersant contains chemicals that are low in toxicity to marine life and more efficient at dispersing thick and weathered oils. It has been tested and satisfies the chemical and physical specifications given by the government to be used for dispersing oil spills in seas.

Contact us for more information about the effectiveness of Redox Oil Spill Dispersants.